As you may have seen in previous days posts I have been playing around with new bread recipes, some with success, some not so much.

I decided to get my sourdough starter out of the fridge and have another go at sourdough. I have done a few loaves in the past based on Naomi Devlin’s sourdough recipes in River Cottage Gluten Free. They have always been fairly successful.

With the on going shortage of being able to get flour, eggs or anything baking related –  yes that is still going on!  – I have limited supplies of flour left. Most gluten free bakes require a selection of flours ( I had never heard of potato starch or quinoa flour before going gluten free!). I ran out of potato flour a couple of weeks ago, and unfortunately Naomi’s recipes call for potato flour. After some research online I found a recipe that used the flours I have. The quinoa flour is out of date but I am sure it is fine.

The recipe I am trying is one by George Eats, who I have just discovered but love her website and Instagram.

A sourdough usually requires time and so this was a 3 day process. I started Tuesday evening by taking my starter out of the fridge and feeding it. It bubbles away overnight. This used the last of my brown rice flour so no more feeds until I can get my hands on brown rice flour!

Wednesday morning found me getting the pre ferment done and popping it in the terrible warm cupboard of doom to bubble away. Now George Eats suggests an overnight but I went with 3-6 hours as per Naomi purely as I didn’t have time and wanted bread today. Next time I will do overnight to see the difference.

4 hours or so later, the pre ferment gets mixed with the flour and other loaf ingredients. This then gets left for 3 hours again in a warm place.

30 minutes or so before baking the oven goes on and the Dutch oven goes in to heat up. Baking wise after cutting into it I probably would have given it another 15-20 minutes, but that’s the curse of bread, you don’t know what it’s like until it’s cooled and you cut into it.

It’s by far the prettiest loaf I’ve baked! It’s got a nice flavour and toasts well. It’s ok. Needed a bit more cooking and I think the longer pre ferment would give it a stronger sour taste but overall not a bad bake!! 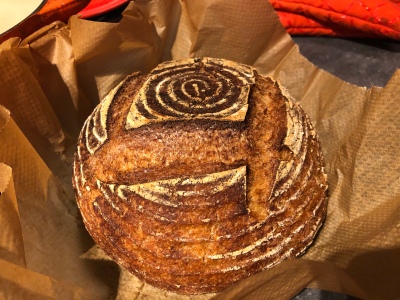