The sun decided to come back out this weekend which was lovely as it meant I got to wear my new shorts by Aesthetic Laundry, a little independent business I became aware of from Instagram. Its owned by three women who make the clothes themselves and are super lovely ( a batch of material for my shorts was faulty so they got in touch to let me know offering a refund or swap for a different colour –  I went for a different colour). You would never get this kind of service with a big faceless company. How many times have you received an item of clothing that is faulty and had to send it back. I really appreciate the personal touch from Aesthetic Laundry, and the shorts are super comfortable. They are going to be a summer staple.

Yesterday we really indulged and had afternoon tea. I know! I will talk more about this in a separate post. It was delicious and the left overs have been eaten today after our morning cycle.

Today’s Sunday ride took us along the Victoria Embankment to Westminster. It is a part of the city that we actively avoid in normal times as its normally chaotically busy with cars, buses and tourists. It is not somewhere you go to meander and take in the majestic beauty of the Abbey and Parliament. Today was lovely. The roads were incredibly quiet. Only cyclists about. As we got to the Houses of Parliament and Westminster Abbey I couldn’t believe how quiet it was, such a joy to be able to walk freely and take in the beautiful architecture. We crossed the road to Parliament Square Garden so we could see the statues and those that have been boxed up to protect them from protesters. The most iconic is of course Sir Winston Churchill who became the centre of the Far Right protests yesterday, which ended up in violence. The scenes on the news feeds were horrid. Who are these awful people. Its strange to think we were stood at 10 o’clock in the morning on a peaceful Sunday in the same place as violent protesters were stood yesterday.

Our cycle continued up past number 10 to Trafalgar Square and then on to the Strand to Temple. I do love the old buildings around there, so much history. From Temple we headed back towards home along the Victoria Embankment until we got to Westminster Bridge. Here we decided to cross the bridge and cycle back along the river on the south side. This was fine until we got to Vauxhall, as we had forgotten how horrid the roads are. We cycled along Nine Elms until we got to Battersea Park and it became a bit less frantic on the roads. 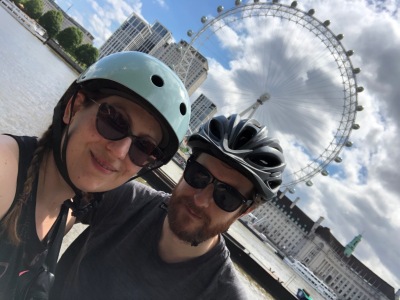 It was a nice cycle. I am glad we got to see Westminster as its somewhere I haven’t been in a long time and to have it so peaceful and quiet –  the joys of lockdown eh!

Home again and an afternoon to relax. I even decided to try my hand at making some vegetable empanadas as I had some gluten free pastry in the freezer.