The area around the iconic Battersea Power Station is fast becoming the place for restaurants to open. In the next few years I wouldnt be surprised if this becomes the new hip place to be once the power station developments have finished. One of the new restaurants that has opened in the development, housed in an archway of the railway bridge is Cinnamon Kitchen.

I am a huge fan of Cinnamon Club in Westminster, a delightfully delicious Indian fine dining experience by Vivek Singh, so was very happy when I got an email through to say that they were opening a Cinnamon Kitchen in Battersea.

I love modern Indian cuisine, the depth of flavour, the imaginative use of spices and sometimes the simplicity of a dish. It brings the best of Indian food to the plate. Do not get me wrong I love a curry but there is something refreshing and usually imaginative about modern Indian cooking.

Cinnamon Kitchen at Battersea Power Station continues the high standard of cooking that you would associate with Vivek Singh and his restaturants. The setting is quite urban chic, lots of explosed brick and metal but with comfortable plus seats. The open kitchen means that you can see all that is going on and smell the beautiful cooking going on inside.

We visited for lunch, which offers small plates, large plates or a very reasonably priced set menu. I will definitely have to return for dinner to further experience the menu. 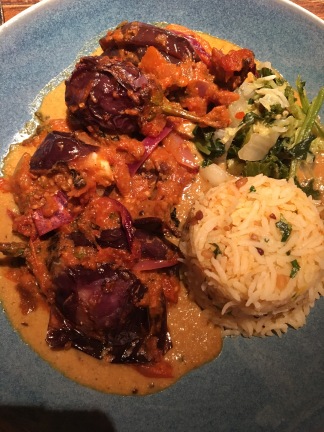 This is a lovely restaurant with delicious food and friendly staff. Hopefully this will become a mainstay in the region.